Recently, a new program called QUEST (QUadrupolar Exact SofTware) has been written by Frédéric Parras from the research group of David Bryce at the University of Ottawa.  As the name implies, this program is capable of simulating exactly the spectra of quadrupolar nuclei in solids without resorting to the assumptions of perturbation theory. QUEST is able to quickly calculate accurate lineshapes regardless of the ratio between the Larmor frequency and the quadrupolar coupling constant.  It even works in cases where the Larmor frequency is much less than the quadrupolar coupling constant (i.e. NQR). The figure below shows a series of spectra calculated for a spin I=3/2 nucleus as a function of the ratio of the Larmor frequency, νL , to the quadrupolar coupling constant, CQ. The spectra near the top are NMR-like and those near the bottom are NQR-like.  QUEST is a fast, graphical, easy-to-use program able to handle multiple sites, export data in Bruker format, import experimental spectra for comparison to the simulations and simulate spectra as a function of the angle of the detection coil with respect to the magnetic field. The package also includes a very helpful well written pdf manual.  The program is reported and described fully here.  To take a look at the program in action, watch these tutorial videos prepared by the author.  The complete program is available for free download here.  I highly recommend it! 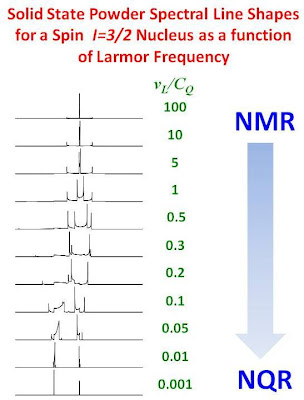 Thank you for your observation and comment. I have contacted the author of the program and he has replied as follows:

"Indeed he is correct. That is because Zeeman-perturbed NQR are generally performed in a coil parallel to the applied field. I cover this in this video. http://www.youtube.com/watch?v=f2ZXpGBUuXM&feature=plcp

The lineshapes are what is expected if you change the coil angle. The issue for the figure arises since NQR and NMR are performed with different coil angles so it's not smooth."

I have looked at the youtube video. The configuration where the rf is at right angles to the magnetic field was covered in J.Chem. Phys.,1975,20,328. The lineshape predicted is totally symmetric around the line centre.

There is no reason to suppose that there would be such a large asymmetry in transition probabilities either side of the line centre as the predominant quatization direction is along the efg axes.

We have acknowledged this in the paper: "There are some differences in the transition moment in the pure NQR regime; however, eq. 14 does predict the correct Zeeman-perturbed NQR line shapes when the magnetic field is oriented parallel to the magnetic field (i.e., β=0°)."

Thank you for the suggestion of the reference but the volume or year does not appear to be right.

Some time ago I wrote a program to do simulations of this type (in QBASIC !!).
I was however approaching from the low field side as I was (and still am) more interested in NQR.

The 90° cofiguration caused all sorts of problems as I decided there needs to be calculations for a third set of angles
in addition to the theta and phi polar angles of the magnetic field and the efg.

Anyway I have done some calculations for the parallel and right angle configurations with Qcc 10 times the Zeeman frequency and eta=0.1.

Thank you for your comments. We went over the code and there was a bug in the calculation of the intensities for spins of 3/2. This gave incorrect lineshapes in the Zeeman-perturbed NQR regime. The lineshapes which are now calculated with the newest version of the QUEST program now resemble those you have posted. The newest version will be posted later today here: http://mysite.science.uottawa.ca/dbryce/

Thank you for reporting the problem. It has now been corrected.