Many of us enjoy a hot delicious cup of coffee. Many (not including myself) will even spend a great deal of money and a great deal of their time in a long queue to get it! The coffee snobs will preach about the differences between a freshly brewed cup of java and the lowly cup of instant coffee. Is there really a difference? Spectrum A in the figure below shows the 13C CPMAS NMR spectrum of ground coffee. Among other things, the spectrum consists of resonances from the woody fibers, polysaccharide gums, tannins, alkaloids and aromatic oils. Spectrum B is the spectrum of used coffee grounds which were subsequently dried. The spectrum is due to the woody fibers and other insoluble material. Spectrum C is the difference between spectrum A and B and represents all the "goodness" of a fresh brewed cup of coffee. Among other things, it represents all of the alkaloids, tannins and aromatic oils. Spectrum D is the 13C CPMAS NMR spectrum of instant coffee which is manufactured by freeze drying brewed coffee. The spectrum is very similar to the difference spectrum, C. This indicates either that the difference between a freshly brewed cup of coffee and a cup of instant coffee lies in very low concentration constituents or that the coffee snobs are wasting their money and time in long queues. I think both are true. 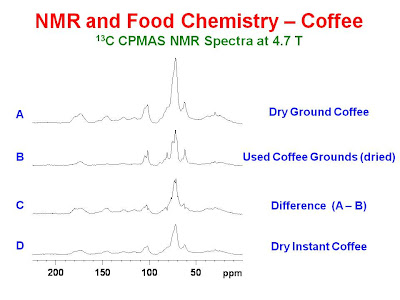 This is incredible! I'm an undergraduate chemistry student in the UK and I'm personally fascinated with NMR and love diving into the realms of it all. I'm also thinking about doing a PhD in NMR as well but that's for when I have graduated later next year.

I love this blog and it just goes to show what you can do with NMR!!

In addition, as a tea person myself, do you think the same can be done with different brands of tea or different brews of tea? Would the results of doing a 'tea' experiment vary if it was done as a liquid NMR then as a solid state NMR? And what sorts of information can be obtained from both?

Thank you for the kind words. Regarding your questions about what NMR can reveal about tea - I really don't have any answers. They would be interesting experiments to try.

Fantastic article! Good chemistry is paramount when making tasty food. Here is an article written by a biochemist who explains the chemistry of cooking. Comments? http://cbt20.wordpress.com/2011/06/27/chemistry-of-cooking/