Dummy scans (DS, Bruker) or steady state scans (SS, Varian) are scans taken in an NMR acquisition before the receiver is turned on and data are collected. Each dummy scan contains all of the rf pulses, delays and gradients used in the pulse program; the only difference is that the receiver is not turned on to collect data. Dummy scans are typically used to ensure that a spin system is in a steady state before data are collected. For example, One may collect a spectrum using a relaxation delay short with respect to the T1's of some of the resonances in the spectrum. The first scan may find the system at equilibrium, as the sample may have sat in the magnet for a few minutes while the probe was being tuned and matched or the magnet was being shimmed. The second and subsequent scans will find the system not at equilibrium, as the system has been perturbed by the rf pulses of the preceding scan(s) and not allowed to fully relax. The data from the first and seccond scan are therefore not the same. After several scans, although not at equilibrium, the system will be in a steady state before each additional scan and therefore each subsequent scan will collect similar data. An example of the use of dummy scans is shown in the figure below. 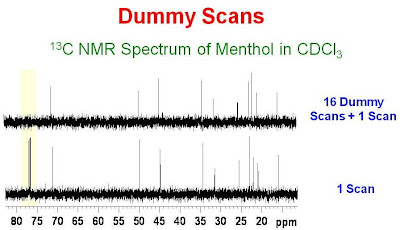 The bottom trace shows a single scan 13C NMR spectrum of a concentrated solution of menthol in CDCl3 after the sample had sat in the magnet for a minute or so. The top trace shows a similar single scan acquisition preceded by 16 dummy scans. The relaxation delay was set to 1 second and the acquisition time for the FID was 1 second. 90° pulses were used in both spectra. One can see that some of the resonances in the top spectrum are attenuated in comparison to the bottom spectrum. The 13C signal from the CDCl3 (which has a long T1) is missing in the spectrum acquired with dummy scans. The dummy scans have selectively presaturated the solvent.
Posted by Glenn Facey at 2:37 PM

Thank you for your help!

Sven,
It is important to wait for your sample to magnetize after it has been placed in the magnet (~ 5*T1) before collecting data. Usually the time it takes to tune the probe and set up the acquisition is more than adequate. I rarely use dummy scans for solid state NMR.

Hi Glen
Would you say it is necessary to use dummy scans when simply measuring T1 or T2 of a sample? I am measuring the relaxivity of nanoparticles, i.e. the relaxation time of water protons so I do not need any complex information from my experiments such as chemical shift spectra. My thinking is that by simply ensuring I have the same times for magnetization equilibration etc I do not need to worry about dummy shots and my data should be comparable within and between series. Do you agree?
Thank you in advance
Anna

Anna,
There would be no need to use dummy scans provided your recycle delay was 5 to 10 times the T1's you are interested in measuring. If the recycle delay is less than that, I would recommend using dummy scans to avoid any determinant errors. These errors may differ from sample to sample depending on the value of T1 in each sample.