In order to obtain optimum resolution, NMR spectroscopists always correct the inhomogeneity of the magnetic field around the sample by adjusting the current in the the room temperature shim coils. The magnetic field homogeneity around the sample depends not only on the quality of the superconducting magnet but also on the magnetic susceptibility of the materials in the vicinity of the coil and the sample. The careful selection of materials in probe manufacturing and their use around the coil are essential for being able to produce a homogeneous field in the vicinity of the sample using the shim coils. This is one of the reasons why high resolution NMR probes are very expensive. One "material" near the coil which is often overlooked by the NMR user is the VT (variable temperature) gas being passed over the sample. The two most common VT gasses are air and nitrogen. One might think that these are very similar to one another as dry air is approximately 80% nitrogen. The magnetic susceptibility between the two however, is quite large and they will distort the magnetic field around the sample to differing extents. This is demonstrated in the figure below. 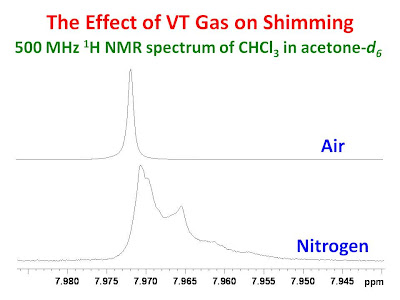 A sample of CHCl3 in acetone-d6 was placed in a 500 MHz magnet equipped with a probe using air as the VT gas. The magnet was shimmed and the spectrum acquired is shown in the top trace. The air source was then replaced by a source of nitrogen gas at the same flow rate. The spectrum was measured again without re-shimming the magnet and is displayed in the lower trace. The difference in line shape and width is due to the difference in magnetic susceptibilities between the two gases. It should be noted that a spectrum of similar quality to the one obtained using air can be obtained after re-shimming the magnet to correct for the susceptibility difference.
Posted by Glenn Facey at 1:31 PM

In addition to the difference in magnetic susceptibility, which is in fact the main cause of differences, there is also the fact that O2 is paramagnetic and will affect the relaxation quite a bit. This is more of an issue for O2 dissolved within a sample rather than O2 being used as VT gas, but nevertheless there is still an effect.

Thank you for your comment. The paramagnetic oxygen used as a VT gas outside of the NMR tube would have no effect on the relaxation of nuclei inside the NMR tube. You would see this effect only for dissolved oxygen inside the sample tube. See this post from Sept 17, 2008.