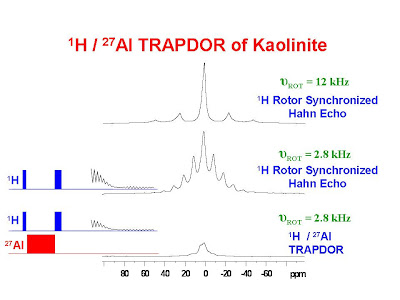 This technique can be used to "find" quadrupolar neuclei which are "invisible" by direct detection due to their very large quadrupolar coupling constants.
Posted by Glenn Facey at 11:44 AM

Nice post. Thank you. Could you tell us how do you do the phasing for the TRAPDOR spectrum? Did you use the same parameters as the Hahn echo? Sometimes people use the "difference" spectrum, by substracting the TRAPDOR from Hahn echo, but often substracting two spectra generates sharp negative peaks, any suggestions?

Thank you for your comment. You raise a very important (and in my opinion often overlooked) point. Indeed, there is a significant phase difference between the Hahn echo spectrum and the TRAPDOR spectrum. These phase differences make difference spectroscopy very problematic and subjective as each of the spectra must be phased independantly. The most sensible thing to do to avoid subjective errors due to phasing differences is to consider the difference in the overall signal intensity.

Thank you Glenn. Your answer is very helpful. By the way, how do you measure the overall signal intensity? Do you use the intensity of the echo top in FID (real+imaginary) or you do the integration in the spectrum? Thank you.

In this case I did not measure the signal intensity at all however either of the ways you propose should be OK - or perhaps even calculating a magnitude spectrum.