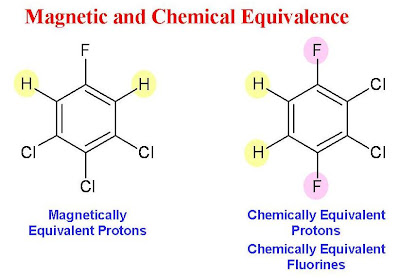 I understand the concept but is this statement exactly correct:

"If the coupling to the third magnetic nucleus is different for each of the nuclei being considered, then the nuclei are chemically but not magnetically equivalent to one another."

Wouldn't the two protons in your example on the left (magnetically equivalent) each couple differently to, say, the chlorine on the "left" of the molecule?

You are absolutely correct. I was hoping someone would make that point. In this case I think the chlorines are "self decoupled" due to fast relaxation between the energy levels so I suppose that we can think of them in this case as having no spin. There certainly are complications though if you start considering all of the 13C isotopomers....

so you mean
we can talk about spin systems only presence of elements which shows NMR jst like C13,F19 & etc ?...
can u give another example ??

what is exactly "self decoupled".. ?

Yes, it is only the magnetically active nuclei that are important when considering magnetic equivalence.

I didn't understand why the protans in the left example do not show the magnetic equivalence?what factor decides?How can we say directly by seeing the example with out checking the NMR spectrum?

What about the case of Y-C-O-CH2-X, where X is aprotic and not O-C and the molecule has no chirality? The protons are chemically equivalent, enantiotopic. They appear to be magnetically equivalent - the spectrum shows a singlet for the CH2 group but in any single conformational geometry, the dihedral angle between each of the protons and the carbon of C-O is different; by the Karplus relationship, the 3J coupling should also be different and because the 3J coupling is different, the protons are magnetically different - does that make sense?

I'm not sure I am clear on the structure you propose. Is it Y3C-O-CH2-X or Y-(C=O)-CH2-X. In the second case, there is no three bond coupling between the protons and 13C. For the first case, you would be correct in that the 3 bond H-C couplings could be different however this would only be true for the 13C isotopomer where the Y3C- carbon was labelled. This would only be 1% of the signal. The other 99% of the signal would be for the 12C isotopomer for which there is no 3 bond H C coupling.

This seems to be weird nomenclature. I don't really understand the need for such definitions.

Anonymous,
I think the nomenclature is quite descriptive. Such definitions are needed because there is an important difference between chemically and magnetically equivalent nuclei which affects the outcomes of experimental measurement.

How about Ph-CH=CH-Ph (cis or trans), I am so confused on these cases. The textbook stated they are magnetically equivalent and give one signal on the spectra. But if you check the chemical distance from Ph to each proton on the double bond, they are not at the same distance. Is there any explain for these?

The result is more clear in the 1H NMR spectra of cis- and trans- (H)(F)C=C(H)(F). In each of these cases the 1H spectra are complex because the H-F coupling constants much greater than zero.

I hope this is of help.

For 1,3 dichlorobenzene, are protons on position 4 and 6 magnetically equivalent?
Also, is chlorine nmr nuclei active, which then affects the magnetic equivalence of the protons in question?

The protons in the 4 and 6 positions of 1,3-dichlorobenzene are magnetically equivalent if all of the carbons are 12C and the 35Cl and 37Cl nuclides are self decoupled due to fast relaxation. If the 35Cl and 37Cl nuclides are not self decoupled, then the protons in positions 4 and 6 are chemically but not magnetically equivalent.

Dear Glenn,
Thanks for your kind reply about " the issue on both cases (cis- and trans- Ph-CH=CH-Ph) of the protons on the central double bond are isochronous".

In the textbook" Introduction to Spectroscopy, 5th. Pavia , Page 398
It states that A molecule that has a symmetry element(a plane or axis of symmetry) passing through the C=C double bond dose not show any cis or trans splitting since the vinyl protons are chemically and magnetically equivalent. Are these correct?
Besides, The books describe in the beginning of the Chaper 7.3 Magnetic equivalenece. It showed that fumaric acid do not showspin-sping splitting on the trans vinyl hydrogens. Does it mean they are also magnetically equivalent?

Thanks for your kind explanation.

The statement (as you have written it) [if] "A molecule that has a symmetry element(a plane or axis of symmetry) passing through the C=C double bond dose not show any cis or trans splitting since the vinyl protons are chemically and magnetically equivalent." is not correct. If you take into account 4 bond couplings, you see splittings in the vinyl protons in both the cis and trans cases. In both cases the vinyl protons are chemically but not magnetically equivalent. If the 4 bond coupling is very small, it may not be observed and there would be no apparent splitting. This is also true for fumaric acid. Your statement is correct if the X substituents on the double bond have no spin. I suggest that you take a look at Robin Harris' book "Nuclear Magnetic Resonance Spectroscopy".

I understand this but one thing that is still a doubt fr me , i.e, can two chemically non equivalent protons be magnetically non-equivalent alwayss

Unknown,
You haven't provided enough information for a conclusion. What is the "center"? What is the entire structure?
Glenn

However, going by that criteria if you were to look at ethene:
the coupling of the top left proton to the proton trans to it would be different than the cis coupling.
How are these considered magnetically equivalent from that definition? I know it is magnetically inequivalent but ethane technically have different coupling if its cis vs. trans.

Thank you for this post. Sometimes we forget the simple things, but we need to remember these to move forward in our study.