The Effect of Molecular Alignment in a Magnetic Field

Molecules in solution tumble isotropically. The fast random motion averages out the chemical shielding and quadrupolar interactions to their isotropic scalar values. As a result, for solutions, one observes peaks at the isotropic chemical shift values. The quadrupoar interaction averages to zero and is not normally observed directly in solution (except perhaps as broad lines due to short T2 relaxation times). When molecules are fixed in a particular orientation with respect to the magnetic field, as they are for example in rigid single crystals, one observes NMR lines whose positions (frequencies) depend on the orientation of the single crystal in the magnet. In the case of a quadrupolar nucleus, the observed quadrupolar splitting will depend on the orientation of the crystal in the magnet. Like molecules in single rigid solid crystals, molecules dissolved in liquid crystalline solvents can also have a preferred orientation in a magnetic field. In this case, one is able to observe a quadrupolar splitting which is unobservable in isotropic solution. This is illustrated in the figure below for the 2H NMR spectrum of water in a liquid crystalline solvent. The solvent was prepared according to M. Ruckert and G. Otting, JACS, 122, 7793-7797 (2000). In the bottom trace, the sample is liquid crystalline and one sees a quadrupolar doublet for the spin I = 1 2H. In the upper trace at higher temperature, the system becomes isotropic and one observes a sharp singlet for the 2H resonance. 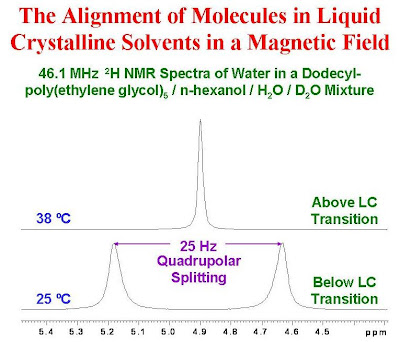 Thank you to Melanie Mastronardi from David Bryce's lab for kindly providing the sample used in the figure.
Posted by Glenn Facey at 2:28 PM