Improve Your Chemical Shift Resolution Without Going to Higher Fields

Deuterated chloroform is a very inexpensive solvent suitable for many organic compounds, however, the proton spectra of compounds dissolved in CDCl3 often have overlapping peaks complicating the interpretation of the data. One solution is to use a higher magnetic field strength but, what if you are already using the highest available field? One method used a great deal in the past seems to have been forgotten - the use of an aromatic solvent like benzene or pyridine. These solvents induce shifts in the resonances of the solutes often providing dramatically better resolution. Below is an example of the 500 MHz spectrum of tropolone. This compound undergoes fast exchange between the two tautomers indicated in the figure. The bottom trace is the spectrum in chloroform-d and the top trace is spectrum of the same sample in benzene-d6. The exchangable proton is broad and not shown in the figure. The improvement in resolution in the top trace compared to the bottom trace is remarkable. 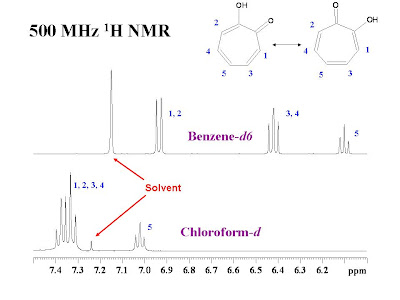 The next time you are fighting a resolution problem, try using benzene-d6 as your solvent!
Posted by Glenn Facey at 1:04 PM

Why does chloroform make the signals very overlapped?
Is it because of polarity?
Thank you very much...

Thank you, Glenn, and so for this very useful blog!

I have synthesized a compound with the overlapping problem, but it is not soluble in benzene. However, it is soluble in pyridine. Would pyridine afford similar results?

It is the magnetic fields generated by aromatic rings in the benzene solvent that drive the separation of the solute signals. You may have some luck with pyridine as a solvent.

First I would like to thank for creating this blog, where we can sort out problems and get out with convinced answers with your experience and knowledge.
My query is, when recording the 1H NMR, we usually fix the flip angle 30 degree (30 dgree pulse) at which we get reasonable quantification of the number of protons. For example, if we set 90 degree pulse along with appropriate relaxation delay, what extra advantage we would observe in the spectra ???
1. Do we get spectra with more intensity than we record at flip angle 30 degree ??
2. Do we get exact quantification of spectrum ? do we really required more than 30 degree pulse ????
I will be very grateful if you could resolve my doubt..

VNM,
I think this link will answer your questions.
http://chemnmr.colorado.edu/manuals/quantitation.pdf