The Effect of Viscosity on 1H NOESY Spectra

For small molecules, 1H 2D NOESY spectra exhibit positive NOE's between protons close to one another in space and the off-diagonal correlations are opposite in phase to those of the diagonals. As molecules become larger and larger the motional correlation times become longer and longer. As the correlation times become longer and longer, the NOE's become less positive, cross zero and then become negative. For large molecules, like proteins, the NOE's are negative and the off-diagonal correlations between close protons are of the same phase as the diagonal peaks. When the correlation times are extremely long, for example in rigid macromolecules or solids, the dipolar coupling among all of the protons is inefficiently averaged by molecular motions and spin diffusion becomes efficient. Spin diffusion allows all of the protons in a dipolar coupled network to exhibit correlations with one another. The sign of the correlations is similar to that observed for chemical exchange or negative NOE's. This phenomenon is demonstrated in the figure below. In the figure, positive contours are represented in black and negative contours are represented in red. The NOESY spectrum on the left is that of a solution of menthol in CDCl3. The off-diagonal correlations between proximate protons is opposite in phase compared to the diagonal responses, typical of small molecules with short correlation times. The NOESY spectrum on the right is that of the same solution of menthol dissolved in a very viscous fluorinated oil. The extreme viscosity of the sample is sufficient to make the correlation time for the molecules very long such that the menthol behaves like a very large macromolecule where spin diffusion is efficient. As a result, off-diagonal responses are of the same phase as those of the diagonal and are observed between all protons in the molecule. 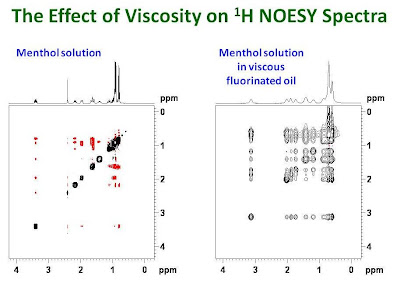