The pleasingly symmetric and narrow Lorentzian resonances in a high resolution NMR spectrum are truly things of stunning beauty, appreciated by all NMR spectroscopists. Their majesty depends on the homogeneity of the NMR magnet around the sample. Inhomogeneous fields yield low resolution NMR spectra with broad asymmetric peaks pleasing no one. These repugnant, distasteful spectra are often obtained when automatic shimming routines are used on under-filled samples, samples with solids present (precipitates, floaters of suspended solids), samples with thermal gradients, poorly mixed samples etc…. Have you ever looked at such a spectrum and longed to recover the hidden beauty, resolution and information you know is present in the depths of its repulsive form? In many such cases reference deconvolution is a processing technique able to help. The distortions in a spectrum from an inhomogeneous magnetic field affect all peaks in the spectrum in the same way. The imperfect FID giving rise to the offensive spectrum, FIDexp(t), is essentially a perfect FID, FID(t) multiplied by an error function, E(t), resulting from the inhomogeneous field.

If we could find the error function and divide the experimental FID, by it, we could produce a perfect (or at least improved) FID, the Fourier transform of which would be a spectrum corrected from the effects of field inhomogeneity. In the reference deconvolution technique, one selects a high signal-to-noise ratio singlet peak as a reference in the experimental spectrum and sets all other points in the spectrum to zero. This spectrum is inverse Fourier transformed to produce an FID of the distorted singlet, FIDrexp(t). A synthetic FID, FIDrsyn(t) is constructed for what one would expect the time domain signal to be for a perfect reference peak (e.g. a sharp Lorentzian). The error function for the reference peak Er(t) is then determined by:

Since all peaks in the experimental spectrum are affected equally by the inhomogeneity, E(t) = Er(t) and we can compute a corrected FID for the entire spectrum,

The corrected FID is Fourier transformed yielding a much improved spectrum. This technique is available in newer NMR software processing packages and is particularly easy to implement in the MestReNova software package available to NMR users at the University of Ottawa. An example is shown in the figure below for a 300 MHz 1H NMR spectrum of a mixture of compounds. 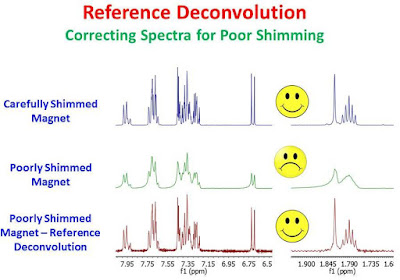